The KC0TKS 10 meter beacon is now broadcasting in QRSS30 mode from atop a 3000 foot mountain in California at approximately 28.2215 MHz at 25 milliwatts. The exact frequency last reported is 28.221425 MHz. The original CW beacon went on the air May 9, 2007 in Sedalia, MO and has been in nearly continuous operation since. This is the first major change since its inception.

This mode is normally not readable by ear. Transmissions by this mode are normally many hundreds of times weaker than your normal CW transmission and dits or dahs are sometimes several minutes long. Instead, we use a computer program to be able to see the Morse that is being sent.

For the typical beacon hunter, the only change to your routine would be to park your receiver on 28.2215 in-between your normal scans. The software will do the hunting for the QRSS beacons while you are away from the rig and store screen captures for you to look at later.

Eventually, several "grabbers" will be set up. A grabber is a receiving station that posts its QRSS screen captures to a website for all to browse in real time. If you would like to operate a grabber for this project, please email kc0tks@gmail.com .

The KC0TKS grabber in Missouri is now up at http://www.kc0tks.org/argo   . 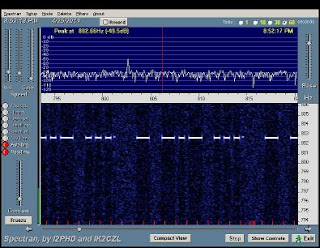 Pubblicato da i121171/IZ1CRR a 1:34 PM
Email ThisBlogThis!Share to TwitterShare to FacebookShare to Pinterest